Much has been made of Ben Hogan’s steely-eyed, silent demeanor when playing in competition. But the lighter aspect of his personality is often revealed by close friends such as LPGA pro, Kris Tschetter.

From Mr. Hogan, The Man I Knew…

I closed with a one over par round of 72, but I still didn’t feel like I’d hit the ball well, especially given how hard I’d worked on my swing going into the week. So, rather than hang out on the range at Colonial with the other players, coaches, caddies, and fans, Dad and I got in the car and drove over to Shady Oaks.

I stopped by the men’s grille to let Mr. Hogan know that I was going out to practice and to let him know it was my Dad with me. I got a drink and then went out to my favorite spot on the Little Nine. I had been hitting for about five minutes when he showed up. After a few pleasantries with Dad we got down to business.

It only took a couple of swings for him to realize what I needed to do. “You’re leading with your head,” he said. He demonstrated by taking a mock backswing and then sliding his head forward before the club ever moved on the downswing. Then he showed me how that forced me to cast the club from the top and work my head and shoulders up to make contact. The result was a weak cut or pull. It was a problem I’d had in my swing for a long time, and one that increased under pressure.

“You can’t start the downswing with your head and arms,” he said. “You’ve got to start with your hips and legs and then hit it.” It was a theme I knew well.

We worked on this for awhile. I had given my Dad strict instructions to sit quietly in the cart. But he couldn’t help himself. He got up, took a step forward, and said, “Don’t you think she’s taking it a little outside in her backswing?”

Mr. Hogan didn’t even look at Dad. He just pointed his thumb in his direction and said to me, “Who’s this idiot?”

We all laughed. Apparently, my dad is as hard to offend as I am. 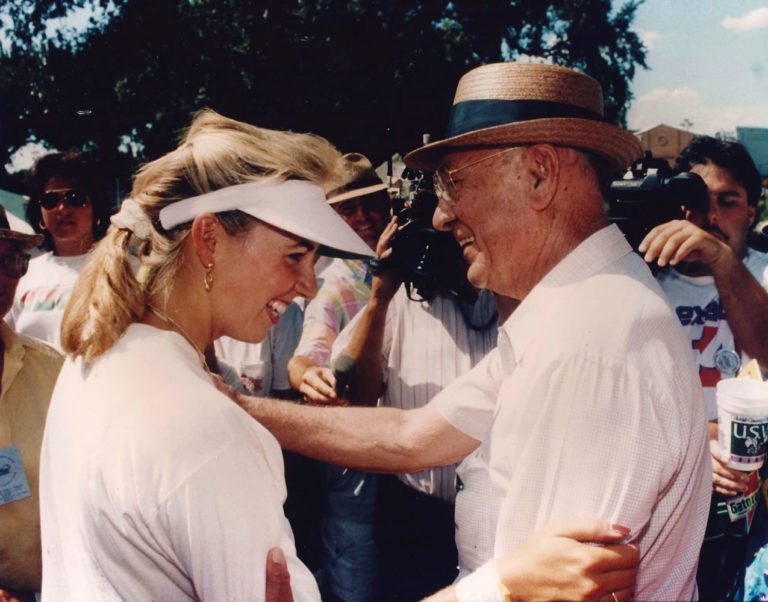