I worked at Rivera Country Club and Bel-Aire Country Club for a total of five years when I lived in Los Angeles in the 1990’s. They are two of my favorite golf courses anywhere. Both are very unique.

They were designed by the team of George C. Thomas, Jr. and William Bell. Billy Bell was the foreman for George Thomas, which meant that he was the dirt mover. According to many, he could move dirt like no other. Bell had an ability to incorporate drainage features into designs without anyone recognizing that course contours had been created to move water.

He found ways to get water to drain on these two canyon golf courses that no one could envision. Remember, it doesn’t rain a lot in Southern California — but when it does, look out.

Billy Bell’s talent is one of the reasons why Riviera is regarded as a top 10 course in the US.  His designs are filled with wonderful swales and valleys that make a golf course so interesting and pleasing to the eye.

The test of golf at Rivera is truly amazing. It’s a place of such great history and the level of difficulty never really lets up. Even when faced with a 310 yard par four such as the 10th hole, you’re thinking birdie when you should really be thinking, “I don’t want to leave this hole with anything worse than bogey.”

One of the biggest challenges at Rivera is reading the greens. You must know where the lowest points on the golf course are. That’s right, plural: the lowest points. If you view an aerial photo of the course you’ll notice that it is traversed by a “wash.” On the East Coast, we refer to these as streams, creeks, burns or brooks — usually because they’re filled with water. That’s not the case in Southern California or, for that matter, the desert in California and Arizona. 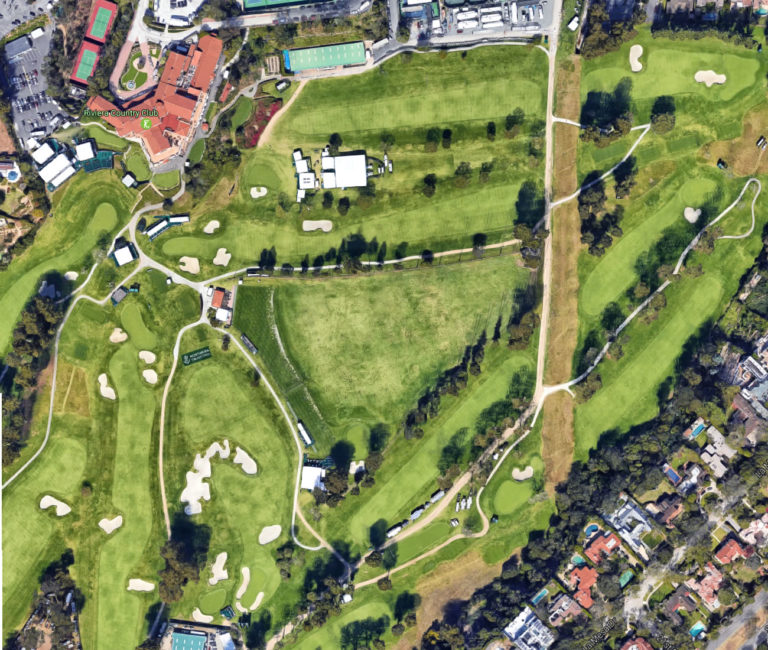 The wash at Riviera runs across the 1st hole and in front of the tee box on the 2nd. It then crosses the 12th hole about 130 yards out from the green (its widest point) and continues to the front of the 13th green where it’s also very wide. Then it runs down the side of the course on the 13th hole and smack down the middle of the 8th hole. Finally, it travels back across the 7th fairway and runs in front of the green on the 6th hole before heading out to the ocean a few miles away.

Why am I describing this? Because there are multiple low points on the golf course due to this wash. More importantly, the wash will affect your putts in a certain direction on one hole, then in a completely different direction on another hole. The general break is to the West, but the South factors in quite a bit, too. It all depends on what side of the course you’re on. There are some divisions on the course and quite a bit of hilly terrain. 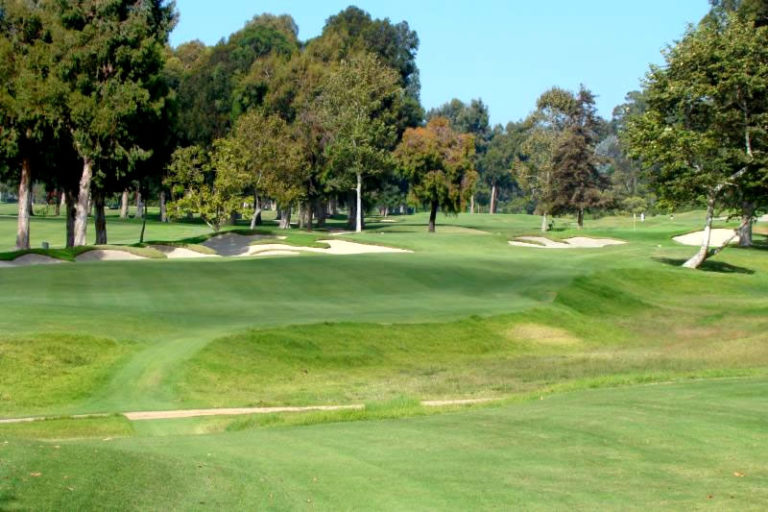 Now, I learned this from playing Riviera as much as possible when I worked there. But, I also had the help of the oldest employee at the club, a man by the name of Sal Mendez. Sal was quite a player in his day. He held the course record at Rivera for many years and he would beat Ben Hogan on occasion.

Sal, it happens, was Mr. Hogan’s practice round playing partner at Riviera. Hogan preferred privacy when he played with Sal, possibly because the PGA Tour didn’t allow people of color to play in their tournaments. A more likely reason was because Sal could read the greens at Riviera like no one else.

Sal told me that he would put a baseball cap on Hogan’s head  (instead of his trademark hat) and sneak Ben out the back door of the hotel onto the course. They would make their way down the embankment on the 18th green and off they’d go, free and clear of the galleries awaiting Hogan’s arrival on the first tee. They usually started on the third hole because the tee was hidden from the hillside near the clubhouse where the crowds gathered.

Sal shared quite a few stories with me and he shared the most valuable information of all: his knowledge and approach to playing the course. I would have to say that the man had so many loops at Riv (as well rounds of golf) that he could have played in the dark and broken par. For Ben Hogan, Sal was the equivalent of today’s golf statisticians.

It wasn’t until Sal told me about the washes and quadrants on the course that I was able to break par at Riviera. I’ll never forget the look of pride on his face when I told him I shot 68. Maybe he was proud of me … or perhaps he was proud of his own knowledge.

I’ll never forget my friend Sal. And I’m certain that Ben Hogan never forgot him either.